AGE OF INSTITUTION AND ACHIEVEMENTS 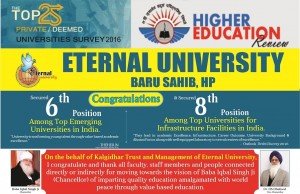 With this vision in mind, Sant Attar Singh Ji sent his devotee; Principal Teja Singh Ji ((M.A., LL.B) abroad in 1906, to get the best possible modern education available at that time. Principal Teja Singh went abroad and first studied at Cambridge University (U.K) and then at the world famous Teachers College, Columbia University (USA) and finally went to Harvard University, Boston, USA where he completed his M.A. degree.

Sant Teja Singh Ji also established a small place of worship at Baru Village and performed ardas to the almighty God (Waheguru) that an Institution of higher learning may be granted here (as vision and wishes of Sant Attar Singh Ji). Thus, conceptual and spiritual foundation of Eternal University was laid at Baru Sahib, that day.

Before leaving this mortal world, Sant Teja Singh Ji designated Baba Iqbal Singh ji (Baba ji) (Retired Director of Agriculture from Himachal Pradesh and present President of The Kalgidhar Trust) to carry forward the Mission. He started the AKAL ACADEMY at Baru Sahib (a prelude to Eternal University) in 1986 with 5 students, which has now grown to a formidable strength of approximately 1500 students and 200 of them hail from 16 foreign countries – with 100 students from USA alone. It is a 10+2 Residential School.

Akal Academy at Baru Sahib also has 128 sister Akal Academies spread over five States (i.e Himachal Pradesh, Punjab, Haryana, Rajasthan and Uttar Pradesh). All these academies are affiliated to the Central Board of Secondary Education (CBSE). The total number of students in these Akal Academies are now around 60,000 and 40% of these students are girls. Approximately 20% of the total student body is studying totally free of cost. These students are either orphans or belonging to poor and under-privileged rural families.

All these Academies are located in rural areas. These academies have established an outstanding academic standard. Additional 130 such academies are also planned for the next three years, again in the rural areas with estimated future enrollment of more than 1,50,000 students.

The Kalgidhar Trust runs 280-bed Akal Charity Hospital at Baru Sahib. It also manages an orphanage, a senior-citizens’ home, a widow home and a homeless women’s home. All of these charity organizations are located at Baru Sahib and run without incurring any cost to the residents. The Kalgidhar Trust is also engaged in several other welfare projects for women empowerment and vocational training to children in the rural areas. 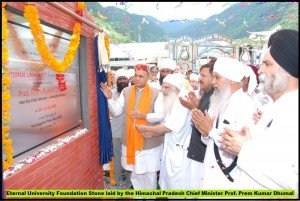 On July 3, 2006, His Holiness Baba Iqbal Singh ji (President of The Kalgidhar Trust) performed ardas to Waheguru for granting the establishment of Eternal University at Baru Sahib, which is considered equivalent to laying the foundation stone in the worldly sense.niv-pathar

The network of 129 Akal Academies, now in operation under the mission of creating permanent peace in the world through a unique system of education, has established itself (in a short period of 30 years) as an outstanding “High School Network”, which has become an outstanding brand in the country with high academic standards, producing exemplary students and global citizens with a vision of “Universal Brotherhood of Mankind“. The Kalgidhar Trust is a complete non-profit organization and Eternal University is run as a non- profit organization as well.

According to Baba Iqbal Singh Ji “…modern scientific education alone will not serve the humanity well, until and unless it amalgamated with spiritual education”. The graduates undergoing this unique education system will not only be outstanding in academics but with high moral values will have love for humanity, compassion for the weak and the poor and sense of selfless service for the community. They will act as the Ambassadors of spreading the message of universal brotherhood for attaining eternal peace and harmony wherever they live, work and raise their families.

Eternal University with its seven constituent colleges is unique in imparting value based education to girl students and is the first private university of Himachal Pradesh to start College of Nursing, School of Public Health and College of Agriculture. Among several previous recognitions the Eternal University has been recently recognized as “The 20th Best Higher Education Institution in India, 2019 which are providing a broader perspective and cutting edge higher education with a focal point on fostering skills and innovation” by EDUCATION BRAINIAC magazine. In a largely residential campus the day-scholar girl students from nearby areas of Sirmaur district who could commute from home can now also pursue their studies in the Eternal University. Situated in the Valley of Divine Peace the Modern Gurukul is providing safest, drug and pollution free environment with facilities such as sports complex, gymnasium, NSS and NCC units, experimental farms, poly houses, modern dairy complex, solar power utilization systems and support for holistic development of its students. The Eternal University has organized several conferences, workshops, camps and Kisan Melas with emphasis to address the crucial problems of farmers of Sirmour and adjoining districts of Himachal Pradesh for their inclusive development.

It is continuously looking forward to take up research in the thrust areas and research gaps in Agriculture, Food Technology, Biotechnology, Public Health, Basic Sciences, Engineering & Technology and Renewable Energy with the teams of world class scientists, in-house and external funding support from different funding agencies of Govt. of India and Himachal Pradesh.